As Published in U.S. News & World Report; and Best Lawyers in America

On May 1, 2012 at the Boston College Law Day celebration, held at the Boston Seaport Hotel, Paul M. Kane was the honored recipient of the Daniel G. Holland Lifetime Achievement Award.  The Holland Award is presented to an individual whose life exemplifies the ideals of professionalism and service, and has over the course of their lifetime, made significant contributions to the Law School and the community. 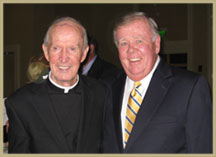 Fr. Monan was the honored recipient of the St. Thomas More Award, an award that recognizes a member of the legal community who represents, in their professional and private life, the ideals of St. Thomas More.

McGrath and Kane has extensive experience before the Single Justice of the Appeals Court, the full panel of the Appeals Court, Single Justice of the Supreme Judicial Court and full bench of the Supreme Judicial Court. The following represents only a small portion of the case law in which McGrath and Kane was involved, but which cases have lasting effect on the landscape of family law.

Among other issues, the Bernier case presented a “novel” question of whether it was proper to discount the value of an S Corporation by “tax affecting” income at the rate applicable to C Corporations where one spouse received ownership of all shares of the S Corporation after divorce and the other spouse was required to relinquish all ownership in the business.  It should be noted that the case was remanded to the Probate and Family Court for further hearing consistent with the opinion.  After entry of further judgments, the Bernier case was again appealed.  Oral Argument before a panel of the Appeals Court occurred on January 11, 2012, and the decision remains under advisement.

The Caffyn case raised the first impression question of whether a plaintiff in a divorce action who has not complied with the one year residency requirement of GLM 208:5 may, nevertheless, satisfy the alternative jurisdiction requirements of Section 5 by asserting domicile after a brief period of residence upon a claim that the cause for the divorce (in this case irretrievable breakdown of the marriage under GLM 208:1B) occurred in Massachusetts.  The Supreme Judicial Court decided that a plaintiff domiciled in Massachusetts could satisfy the jurisdictional requirements of GLM 208:1B by making a “subjective determination” that the marriage became irretrievably broken with the Commonwealth of Massachusetts.

Domestic Relations Evidence and Advocacy, with Inker and Sweeney, 1985

Pre-Bankruptcy Planning for the Middle and Upper Income Clients, 1992

MEGA Consulting Conference – A Day in the Life of a New CPA: No Tax, No Audit, Massachusetts Society of Certified Public Accountants, Inc. Educational Foundation, 1998

A Case for the Experts, Massachusetts Continuing Legal Education (MCLE), 2000

The Relationship between Lawyers and the Press; Evolution/Revolution of the Probate & Family Court; the Role of CLE in the Practitioner’s Life

Paul M. Kane, Co-Chair, What Have We Learned and Where Are We Going?